After three days of cold, gray rainy days, the sun is, as I write this, finally breaking through. Yes! Another few hours and I think I would have been officially depressed.

One of the nice things—okay, maybe the ONLY nice thing—about cold fall days, though, is that we can finally start using the fireplace. When we were first building this house eight years ago, we wanted a woodstove: it would be warm, and cozy, and radiate heat, all that good stuff. But then we got talked out of it, how I can’t remember, and just went with a basic fireplace. Now, our fireplace has this thing called an ignitor, which is hooked up to a propane tank: basically, it helps you get things going (i.e. ignite) when you first put in the logs and sticks and paper and all that. One night, right after we moved in, there was some guy coming over to talk to my husband about a particular job, and we thought it would be a nice time to try it out. We were still all giddy with living in a real house, not a rental, where our kitchen floor wasn’t older than both of us combined and all four burners actually worked on the stove. Good stuff.

So I’m cleaning up after dinner, and my husband starts building the fire. I am feeling SO grown up and domestic, watching him as I put away our brand new dishes in our brand new cabinets. We’re really adults now, I kept thinking, mature and moving onto the next phase of our lives. And then…my husband lights the ignitor. And there’s a big WHOOSH! noise, followed by a sudden, very strong smell of burning hair. Turned out he cranked it up a bit too much, and when he lit it, got quite the ignition. The house was then filled with a burning smell we tried to ignore when the guy showed up, although he had to have been wondering what was going on. Nothing to make you feel like a kid again like almost burning down your house.

After that, we were a little gun shy about the fireplace. At least, I was. My husband had no fear, but felt that instead of adding heat to the house, it actually sucked the warmth out, sort of defeating its main purpose. So for years, we didn’t use it, except during emergencies, like the ice storm. Then, though, a couple of years ago, I got fed up. It was a cold night, just like we’ve had recently, and I was crabby about the summer being over and those short dark days ahead. We had some wood on the front porch, left over from the ice storm, and I just told my husband we HAD to have a fire. He grumbled, but built one anyway. And it was….wonderful. Warm and crackling and just made the entire living room, which is big and airy, feel smaller and more cozy. As regular readers of this space know, we are not big fans of winter in this house. We are summer, hot and humid, deviled egg, wish-it-was-July-all-year-round kind of people. But the fireplace? It helps. It makes the winter bearable. So now, each fall, we stock up on wood, and fatwood, and clean out the fireplace. We even have a chimney sweep coming this week, just like in Mary Poppins (although something tells me he will not sing and dance, like Dick Van Dyke). I still don’t feel entirely adulty, in this house or anywhere, for that matter. But there is something about a fire that makes a house feel more like a home. You just have to go easy on the ignitor. A little goes a long way. But I guess learning about that is kind of part of being a grown up too. 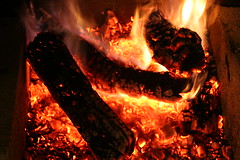 (Note: this is not a picture of my fireplace. I took one, when we made the fire the other night, but then accidentally deleted it. Whoops! But you get the idea.)