I know it’s actually Sunday night, and I normally don’t post until Monday, but tomorrow, I will have no power. I don’t mean in the figurative sense—although I often do feel powerless, in oh so many ways—but literally. We’re at the point with our garage construction that the new power lines have been run, and tomorrow there are all these people coming over to inspect and connect and do a new transformer. Which means at some point—probably just as I am writing a blog entry—the power will go out, I’ll have no internet, and that will be that. So here I am.

In other exciting news, this weekend I FINALLY got around to watching Twilight. We had some friends over and I had the DVD from Netflix, and the boys agreed to put it on with one codicil: they would be allowed to mock it as much as they wanted. I said sure. I have to say, again, that vampires are not my thing. I am not into sci fi or fantasy or really any stories that couldn’t happen here in this world, right now. But I TOTALLY get the appeal of this movie. A lot of it, for me, had to do with Robert Pattinson, who I have been reading about in US Weekly for ages, but never seen on screen. He is not hard on the eyes, I will give you that. When I wrote this on my Twitter, though, I was surprised how many people got SO mad at me for liking him. Apparently, you are either Team Twilight or not, and there’s no in between. Can I just say, though, in my defense, that I don’t think it’s really about vampires? It’s the hair.

Exhibit one? Luke Perry, circa 1990 something:

And don’t even get me started on Johnny Depp in his 21 Jump Street Days: 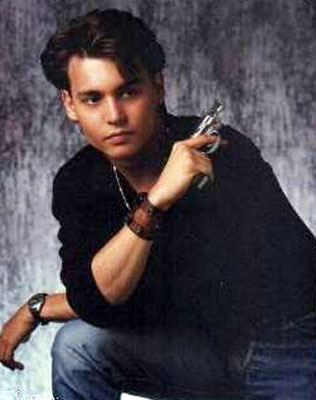 Yeah, I know. It’s kind of creepy. I never really THOUGHT of myself as a person who liked the long, moussed-up hair thing. Especially since I married someone who had a shaved head when I met him. But apparently, this is a trend with me. Although I have to say, Robert Pattinson’s is kind of above and beyond. It looks like birds could be living in there. But still: cute.

The movie as a whole, well, it wasn’t really my cup of tea. I didn’t really expect it to be, though, for all the same reasons the book wasn’t. I’m just way too literal and I like stories about real people. If they have big hair that looks like it could harbor wildlife, clearly, all the better.

Okay, I’m off to catch up on Top Chef and Hoarders. Got to get my TV on before I’m powerless. So to speak.