This weekend, I found myself living vicariously through other YA authors. Meg Cabot rocked the LA Times Festival of Books and nearby signings in pretty much the cutest outfit EVER, carrying the cutest purse ever. Plus, look at these shoes. I’m so jealous! 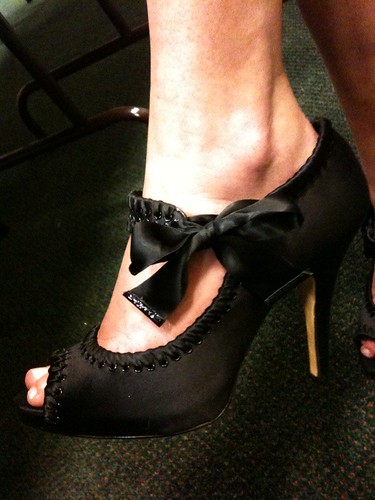 Then, Laurie Halse Anderson ran a half marathon in Central Park. Amazing! And I….well, I dealt with various babysitter issues, saw my daughter through either bad allergies or a bad cold, and worried about Bret Michaels.

I know I have made plenty of fun of Bret here in this space, but I have to say that I LOVE Rock of Love and, by proxy, kind of love him. He’s just so endearing, with his cowboy hat and bandana and faux-serious expressions when he asks if someone will stay and rock his world. I was watching that show while I was in labor, for God’s sake! (True, but somewhat embarrassing, story.) Anyway, when news came this weekend that he’d had a brain hemorrhage and was in critical condition, I was beside myself. I kept checking Google News for updates, and when I was up with my daughter administering Tylenol at all hours, I was thinking good thoughts for Bret. Reports as of right now are kind of mixed…some say he is up and responsive, others still critical. I hope he is okay. All jokes aside.

The other celebrity I’ve been fretting over lately is Tori Spelling. I can blame this one on Life and Style, which I caught a glimpse of at the grocery store the other day. I don’t think they are the most reputable publication, but they had this whole story about how she’s lost all this weight and the pictures they showed were unsettling. Tori, eat a sandwich! Or some of Liam and Stella’s mac and cheese! I hate seeing a pretty girl gone bony, there is nothing more depressing.

I know what you’re thinking: don’t you have enough in your OWN life to worry about, without wasting time thinking about reality television stars? Well, technically, yes. There’s my mom (she’s recuperating great, thanks for all the nice comments) and my sniffly daughter and this novel that is somehow supposed to be getting written and my babysitter with a hurt shoulder and my dogs that I swear NEVER STOP BARKING. But I think, sometimes, you need a break from your regular worries. You know, to shake things up a bit. So you worry about something, or someone, else for a little while. That’s where I’m at with Bret and Tori. I’ll return to my regular worrying soon. In fact, writing this entry I think I already have.

Finally, last week I got a new driver’s license. Which was very exciting, because my old one had the worst picture of me EVER. (Except for maybe one of the two pictures I have of me with Mandy Moore. That is really the worst shot ever taken of me, made ten million times worse because I am standing next to MANDY MOORE. But I digress.) Anyway, when I got my last license pic taken, I didn’t smile for some reason, so I looked really sullen. When my husband saw it, he summed it up thusly: “Damn, convict!” Yeah. This time, I was determined to do better, so I wore eyeliner (big deal these days) and a cute shirt and smiled before the flash popped. Because of a new NC law, though, they don’t give you your license then and there, like they used to. Instead, they send it in the mail. Which meant a week or so of waiting, wondering how it turned out. I was just hoping I wasn’t cross-eyed or crazy looking, and….I’m not. Yay! It’s actually not a bad picture. At least I don’t look like I’m getting booked and fingerprinted. One less thing to worry about.

I hope YOU all had eventful, worry-free weekends. Have a good night, everyone!