1. My week began with my whole Julianne Moore story (which I have told to everyone who will listen, but if you missed it, just go back an entry)  and then it’s just been crazy from there. I keep waiting for things to calm down. But I am realizing that this one mom at my kid’s preschool was right when she said to me, very kindly, “Yeah, that’s not going to happen.” Leave it to a mom to shoot it straight. Was my life this chaotic before I was trying to juggle career, home stuff and parenthood? To be honest, I don’t even remember. Wouldn’t change it for the world, however. Although a BIT more sleep might be nice. Just saying.

2. But then there is this meme, from Ultimate YA, which made my day yesterday: 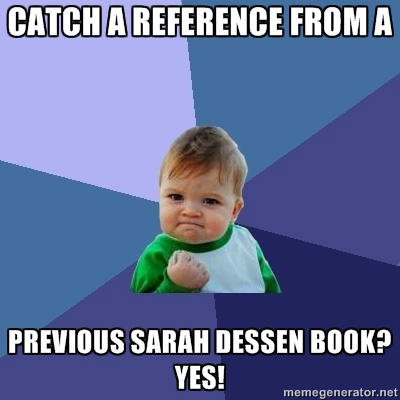 I love this because 1) It’s super flattering and 2) I’m kind of a meme freak, so to be the subject of one is just so cool. I get asked a lot about why I reference earlier books in my later ones. The main reason is that I used to get asked a LOT about whether I would write sequels, especially for This Lullaby and Someone Like You. I think some people are really good at writing series: I just don’t think I’m one of them. But I appreciated the interest, and wanted to do something for all those loyal readers who had devoured every detail in every book. So I put a few little things for them to find, as sort of an inside joke between us. Hopefully if you haven’t read any of the other books, it’s not a distraction, but if you have, it’s like bumping unexpectedly into an old friend. I always think I’m being VERY sneaky with my references, making it challenging. But then, invariably, someone posts them ALL the day a new book is released on Wikipedia, so I guess I’m not so clever after all. Still, it’s fun. Thanks for the meme, UltimateYA!

3. I looked out from my office window yesterday to see my kid having a blast with the babysitter, which is always a great thing. They were piling leaves at the bottom of the playground slide and just barreling into them at full speed, over and over again. Whee! Then, a couple of hours later, she was totally stuffed up. Is there any fun childhood activity that does NOT result in stuffy noses, bug bites or sunburn? Can you be allergic to fun? I mean, when I was a kid we biked without helmets and ate cookie dough by the bowlful, raw eggs and all. Now we have to worry about concussions and salmonella. But I get that. I’m not a fan of head injuries or food poisoning. My husband, watching her sniffle endlessly, said “No more jumping in leaves,” and I thought, “Oh, MAN.” What’s next? No going outside? Wearing a mask everywhere? Yikes. Hopefully not. For now, though, pass the tissues.

4. I never know how many people who read this blog also follow me on Twitter. But just in case, I want to address something that I tweeted this week here in this longer format. I was watching GMA with Oprah guest-hosting, which was GREAT, by the way, and they were doing a segment on steals and deals. They held up some kind of skin moisturizer and Oprah said, “Oh, this is GREAT for ash and dry skin!” So I tweeted this: “Oprah just used the word “ash” to describe dry skin on GMA. I love morning television.” I very quickly got some responses, mostly from African American followers, that it’s a common term for dry skin and I must not know a lot of black people if I didn’t know that. I was surprised: I didn’t mean to seem that I didn’t know the term—I do—just that I had not often heard it on TV, much less from Oprah Winfrey. I did not at ALL mean to offend ANYONE and I was horrified that someone might think otherwise. I deleted the tweet and responded thusly to those who had let me know it bothered them, but I wanted to explain myself here as well. Twitter is SO instant, just 140 characters and an button push. I am sure I am not the only one who occasionally puts things out there that they later regret. Anyway, I just wanted to say again that I never meant to offend. I know now, and as O herself says, when you know better, you do better.

5. On a lighter note, I have decided that it is time to start thinking about taking my kid to Disneyworld. She’s five, she’s obsessed with Princesses and Tinkerbell, and I think it would  make her WORLD to see Sleeping Beauty or Cinderella in person. So I hopped on the internet to do some research and immediately got TOTALLY overwhelmed. So many options. I tweeted about it, and got TONS of great advice from people—try to stay at the park if you can, get the meal plan, book dinners WAY ahead, use an app for ride lines—but I am still feeling daunted. Then again, I am not someone who enjoys planning big events. I get the sense that making all these decisions about the park is akin to putting together a wedding, which was ANOTHER task that almost did me in. In retrospect, I would have been better off letting someone else do that and just showing up at the appointed time (which was what my husband got to do, although he also had to listen to me agonize about appetizers and invitations for an entire year, so nobody really won in that scenario). I’m thinking about looking into the travel agents that work for Disney and/or AAA, to see if they have packages where a lot of stuff is decided FOR you for one price. It may make the difference between us going or not. Maybe the Fairy Godmother runs a travel business? Bippity-boppity-here’s-your-itinerary? It is Disney. Anything is possible.

© 2017 Sarah Dessen. All rights reserved.
Because it was just so freaking awesome, that’s why
The Friday Five!