Yes! My day is made! 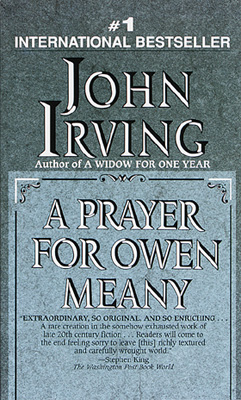 You’re A Prayer for Owen Meany!
by John Irving
Despite humble and perhaps literally small beginnings, you inspire
faith in almost everyone you know. You are an agent of higher powers, and you manifest
this fact in mysterious and loud ways. A sense of destiny pervades your every waking
moment, and you prepare with great detail for destiny fulfilled. When you speak, IT
SOUNDS LIKE THIS!

Take the Book Quiz
at the Blue Pyramid.

It’s the best book I’ve ever read. Simple as that.

So I’m totally snowed in today. We got about four or five inches, and now it’s sleeting on top of it. Lovely! As usual, the news people are completely giddy, as bad weather = big ratings as people check in for forecasts and closings. They want to stay on as much as possible, so they fill in with the most innane reports you can imagine. “Let’s go to Nick at the airport! Nick, what’s happening there?” “Well, what you’re seeing here is an actual de-icing going on behind me. Can you see that?” Oh, the drama! This report was followed by a man talking about how his kids would be fine at the airport, waiting for said planes and said deicing, as long as they had enough batteries for their gameboys. Cut to shot of kids playing gameboys. People: is this news? We’ve also been subjected to stories about how the roads are a little slushy, some shots viewers sent in of snowmen they’ve made (!) and the same weather forecast over and over and over again. Yesterday, before anything even started, they were out doing Team Coverage. They kept showing people standing by sand trucks, overpasses, schools that were still in session. “Well, nothing’s happening yet,” they’d say, “but we’ll be here when it does!”

Personally, I’m going to boycott. And curl up with a good book. Maybe Owen Meany, again?

stay warm, and have a good day everyone!